Major League Baseball handed down its punishments for the Boston Red Sox following an investigation of the 2018 World Series-winning team.

MLB’s report places blame not on the front office or manager Alex Cora, but on the team’s video replay system operator, according to The Athletic’s Evan Drellich. 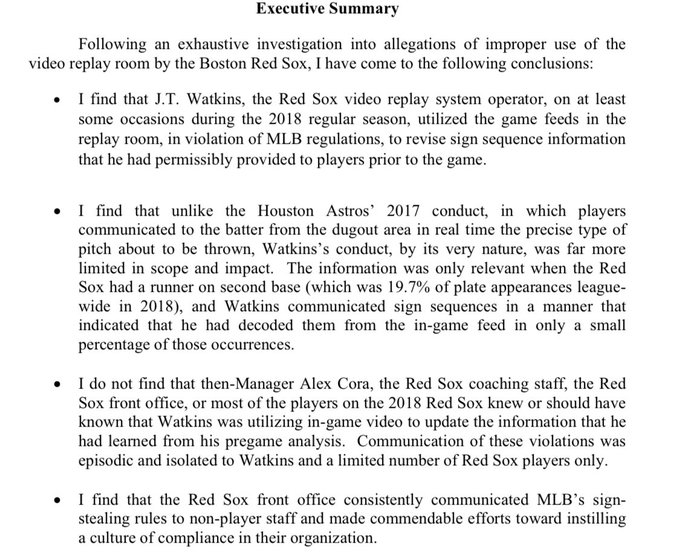 Rob Manfred found that Watkins illegally utilized game feeds in the replay room to help players during games. He also found that this misconduct did not continue into the 2018 playoffs or the 2019 season.

Banning Cora relates directly to the Houston Astros sign-stealing incident and has nothing to do with the Red Sox, according to Drellich.

While these punishments for the Red Sox aren’t as bad as they are for the Astros, they do fit the crime. Houston’s scandal was far worse, and the punishments that came out of that were necessary to try and uphold the integrity of the game.

The Astros were fined $5 million, docked first- and second-round draft picks, and GM Jeff Luhnow and manager A.J. Hinch were suspended for their involvement in the scandal. Luhnow and Hinch have since been fired by the organization.

Although Cora will not see the dugout this season, there have been rumors that Boston plans to bring him back once his suspension is over. This would seem likely considering Cora was not punished for the Red Sox incident in 2018.

If Cora does return in 2021, it’ll be much to the delight of Red Sox fans who have enjoyed Cora’s coaching abilities for the past two seasons.