The Cleveland Indians may change their name!

The Cleveland Indians are joining the NFL’s Washington team in evaluating their name.

The Indians announced on Friday that they are going to talk with their stakeholders and community about the possibility of changing their name. 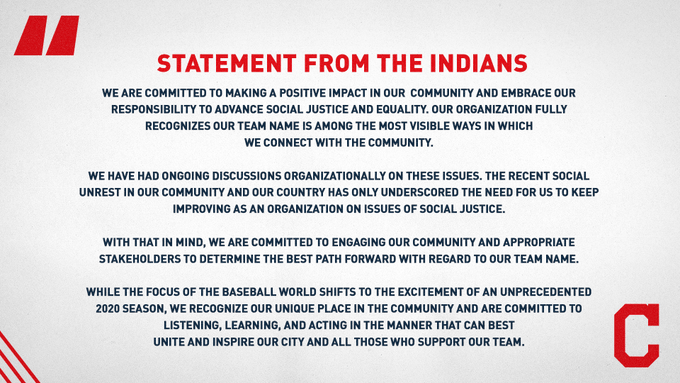 The Indians originated in 1894 as the Grand Rapids Rustlers of the Western League. They became the “Naps” from 1903-1914 for one of their players, Nap Lajoie. Following Lajoie’s departure from the team, the team’s owner asked baseball writers to suggest a new nickname. They suggested the “Indians,” which, according to a history on the team’s website, “was a revival of the nickname that fans gave to the Cleveland Spiders while Louis Sockalexis, a Native American, was playing for the team.”

The franchise has gone by the name Indians since 1915, but sports franchises are increasingly under criticism for using names, logos and uniform design elements that reference Native Americans. Already the Indians have phased out use of the “Chief Wahoo” logo, and the NFL’s Washington Redskins are themselves discussing a name change after receiving pressure from sponsors.

There have been some calls for the Indians (and Atlanta Braves) to change their nickname and logo due to possible stereotypes over the last 20-plus years. The team announced in 2018 that they would no longer be using the “Chief Wahoo” logo. In 2014, they began using instead go with their block “C” on their primary uniforms.

This article first appeared on Larry Brown Sports and was syndicated with permission.