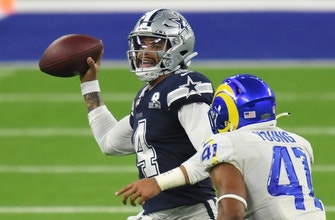 Dak Prescott & the Dallas Cowboys missed on some late opportunities to tie up the game against the Los Angeles Rams last night. Trailing 20-to-17 with over 11 minutes left, Dallas failed on a 4th-and-3 attempt from the 11 instead of electing to kick a field goal. The Cowboys almost brought it close enough for a game-tying field goal attempt with less than a minute left but, a 47-yard completion to Michael Gallup was called back due to offensive pass interference. Mike McCarthy said he was surprised there was a call either way after the game. The official stood by the call, calling it ‘clear and obvious on the field.’ Hear what Skip Bayless has to say about his Cowboys loss.