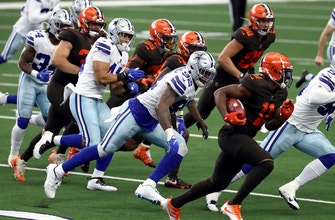 The Dallas Cowboys have been getting crushed for not only allowing the most points per game this season, but also for their lack of effort on certain plays including Odell Beckham Junior’s long reverse touchdown run. During a conference call, starting safety Xavier Woods acknowledged their poor play then responded to questions about their effort, saying ‘we’re in the NFL, you don’t expect guys going full-speed for 70 plays. That’s not possible.’ Hear what Skip Bayless has to say about Xavier’s comments.