News---Online Gambling Uncategorized No. 14 Oklahoma State battles back from 12 down to top Kansas State, 20-18 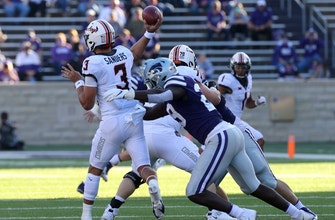 The No. 14 Oklahoma State Cowboys outlasted the Kansas State Wildcats after falling behind 12-0 in the first half. The Wildcats failed to convert on a pair of two-point conversions and quarterback Will Howard fumbled late in the game. Cowboys’ safety Jason Taylor II recovered the fumble for a touchdown pushing his team ahead of the Wildcats permanently. With less than two minutes left in the game, Tre Sterling picked off Howard’s pass and sealed the game for the Cowboys, 20-18.